Ask any group of sailors to name their favorite destination in the Mediterranean and it's likely that sailing in Croatia will top the list fairly convincingly. Reasons for this pole position not only include the incredible blue vistas, crystal clear waters and scenic coastline of more than a thousand islands that create a spectacular visual seascape, but it's also down to cost. Croatia offers great value for money and has a largely uncrowded, uncluttered and unspoiled coastline compared with the development witnessed by many other European destinations. 'Quaint', 'charming', 'safe' and 'stunning' are all words used frequently to describe Croatia's coastline.
Once a backwater, it now offers more than 50 classic marinas, the majority of which have been constructed within the past 20 -30 years and then fully updated in the last decade. Many of Croatia's marinas carry Blue Flag status due to their determination to protect their key attraction - a pristine environment. And whilst you can head to a fully-serviced marina with all mod cons, you can just as easily moor in one of more than 500 harbors, offering age-old ambience. Some of the most popular historic harbors with the sailing community include Cavtat, Korcula Town, Hvar and Stari Grad, Trogir, Sibenik, Sali, Istra and Vrsar, to name just a few!

And for those wanting to get away from it all and embark on an original adventure, you can find any number of safe secluded coves and bays to anchor in, where tranquility is guaranteed. You'll easily find a section of the coastline and a stretch of beach to call your own.

Croatia is well known for having favorable sailing winds and safe waters, making sailing here a practical option for many. Experienced sailors often head out from Pula, in Croatia's north, to explore the picturesque islands and Roman remains of Kvarner Bay, Cres, Losinj, Rab and Krk. Another popular route circumnavigates the stunningly beautiful Kornati archipelago, now protected as a National Park of more than 100 islands.

Boat charter is plentiful along the Adriatic coast, with key centers at the accessible, picturesque and well-serviced ports of Biograd, Split & Rogoznica, Baska Voda (Split), Dubrovnik and Kotor. Sailing boats, motor yachts and catamarans can all be chartered with a skipper and crew, or independently with proof of qualifications.

And if you're not keen to charter a yacht of your own, you'll find plenty of cruising options in some spectacular vessels including island-hopping by schooner, around the islands of Brac, Hvar, Vis, Bisevo, Korcula and Mljet,..etc. Croatia's network of islands are also well connected by ferries if you prefer to step from land-to-land and not test out those sea legs.
Posted by Unknown at 4:00 PM No comments: 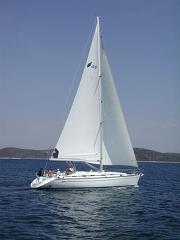 There are many sailing terms exclusively used and that have to be learned by those who haven't a nautical vocabulary as of yet. These technical jargons are part of the sailing world that simply defines the sport. You might learn nautical terms on the internet, in a sailing school or local sailing club. Or if you're like me, you'll learn nautical terms by reading the sailing beginner e Book. In any case, learning nautical terms will help you to become a better sailor with a sailboat crew and enhance your appreciation for the sport.
Let's discuss some of the terminology that you might use. The bow is the front of the sailboat and the back is known as the stern. The right side of the boat while you are looking at the bow from the inside of the sailboat is called the starboard side. The left side is called the port side. The keel is the fin under the hull or bottom of the sailboat that is weighted with lead or some other material, to offset the wind exerted on the sails.
There are three basic types of sails that are used on a sailing vessel. There is the main sheet, which is the biggest of the three and is rigged to the mast and boom. The jib is a smaller than the main and is rigged on the front of the mast ahead of the main sail. A spinnaker sail is used mainly for sailing with the wind that is positioned ahead of the jib and requires a boom of sorts to rig it to the mast. The halyard is the rope that raises and lowers the sail.
Tacking is a term when you are sailing upwind or towards the wind, first you turn to the port side, then to the starboard side in a zigzag pattern, then each of these turns are known as tacking. Jibing is the opposite of tacking, because you are turning with the wind behind you. So when tacking there is a port tack and a starboard tack depending on which way you turn left or right correspondingly.
Sailing directly down wind is called a run. A reach is when you are sailing downwind at an angle to the wind. A broad reach is when the wind is coming from behind the sailing boat at an angle. The sails are turned out away from the boat, but not quite as much as on a run or dead run where the sail would be 90 degrees perpendicular to the hull.
Happy Sailing ! :))
Posted by Unknown at 11:38 AM 3 comments: